Allison Wells is a Reward-Based Trainer which simply means she motivates dogs by giving and removing rewards to change behaviour. She focuses on the science of how animals learn and uses methods which are effective, humane, and scientifically proven. She never expects animals to do something for nothing, but rather is a motivation control freak who identifies, rations and leverages anything the dog likes enough to be a usable reinforcer. For videos of Allison training dogs go here!

A.k.a. Positive Reinforcement: Giving the dog good things - food, toys, praise, opportunities - contingent on behaviours we like which leads to an increase in those behaviours.

A.k.a Negative Punishment: Taking away good things to decrease behaviours we don’t like. (e.g. time-outs)

Setting up the dog to succeed (and be safe) by arranging their environment so that they will make the right choices and will also be prevented from rehearsing (and being rewarded for) mistakes.

When working with fearful or aggressive behaviours it is important to get at the root cause - the underlying emotions that motivate those behaviours such as fear, stress, anxiety, paranoia, and/or discomfort. Using systematic desensitization and counter-conditioning we can change the dogs underlying emotional response to the scary things (whatever triggers the behaviours). We show the dog that the scary things are actually safe AND good news and then in turn see a reduction in the fearful or aggressive behaviour.

Allison does not believe it is necessary or productive to motivate dogs with coercion, pain, fear, and/or physical corrections. This includes using tools such as choke chains, prong or shock collars. In fact studies have shown that this type of training (Positive Punishment and Negative Reinforcement - which deals with the addition and removal of bad things) can have detrimental side-effects such as increased fear or aggression. For More information see Resources.

Is Reward based training permissive? Do you reward what you like and ignore the rest?

Not at all! Reward based training (a.k.a. Positive or Force Free training) does not mean permissive. Just like being a good parent, it is important to set clear boundaries (rules) and be consistent in enforcing them. Allison can show you how to reduce unwanted behaviours immediately using management, training incompatible behaviours, and reward removal (time-outs). In fact she does NOT recommend trying to ignore bad behaviours (a technique known as extinction) because it only works if you have control over what the dog wants, and even then it often ends up reinforcing endurance in the dog if the owner cracks during the process (which, even for the best trainers, can be extremely hard not to do).

Do I have to use food to train my dog?

Professionals like food because it is one of the most powerful motivators in animal training. The reality is that you get more strongly conditioned behaviour if you do not limit yourself to praise and affection alone. Another advantage of food is that you can use it to target the dog into position. Food therefore has two roles: as target (“lure”) and as reward. Training with positive reinforcement allows the dog to relax and learn, and strengthens the bond between you and the dog. Over time, you can expect "more for your money," that is more behaviours for fewer treats. You will also become skillful at incorporating other rewards into training.

Will I always have to use food to reward my dog?

Certainly not as frequently as for a newer behaviour, but yes, maintenance of established behaviour with (concealed) intermittent rewards is a must. There is no free lunch in behaviour, so whether you motivate with food or pain, your dog's behaviour is reliant on consequences. Think of it this way: you have to feed your dog anyway. You can give it all to him for free in a bowl or you can reserve part of his daily caloric intake and make him earn it! Also, don’t forget that there are other rewards besides food: everyday things such as play, sniffing, door opening, car rides and access to other dogs can also be used to reward established behaviour.

Aren’t I actually bribing my dog by luring him into position with a treat?

You can't bribe a dog for doing something he doesn't even yet have in his repertoire! Put yourself in his place. Imagine that someone said "palana." What would you do? Nothing, because you don't understand what that person wants you to do let alone why you should do it. Physically placing your dog into position slows down learning and has negative side effects. Using a lure allows you to elegantly obtain the correct behaviour and as soon as the dog is fluent, you can immediately begin fading the lure so the dog does NOT become "lure-dependent" - meaning he only does the behaviour when you show him the treat.

What if my dog isn't food motivated?

All animals are food motivated because they need it to survive. It is common however for some dogs to be disinterested in treats during training for a variety of reasons such as not feeling hungry, or not desiring the type of treat the owner is using. There are simple solutions to these problems such as using a higher value food during training that is especially yummy (see next question) and/or being sure that your dog’s meal does not immediately precede your training session. You can even go as far as to completely “close the economy” on your dogs food where instead of receiving his meal for free in a bowl, he now has to earn ALL of it in training. Considering that the dog’s ancestor, the grey wolf, spends most of their time and energy on finding food, and that many pet dog’s behavioural issues stem from boredom and under stimulation (they don’t have enough to do), feeding them in this way can actually be great service to our dogs!

Another common reason a dog may not be interested in food rewards could be due to high stress levels. When dogs are afraid or anxious they are often not interested in eating because they have bigger fish to fry - in other words they don’t care about earning rewards when they are worried about their safety.

What type of treats do you recommend?

Using your dogs kibble can work great, especially in low distraction environments like at home. For higher distraction environments or more expensive behaviours (recall) we want to be sure to use the good stuff. Treats should generally be pea-sized (or even smaller for toy dogs) and soft/easy to consume quickly. Avoid hard biscuit treats for training sessions. Audition different options to see what your dog likes best (Shadow thinks pizza crust is the #1 so on occasion Allison surprises him with that to reinforce his recalls).

Do you offer guarantees? How long will it take to Train my dog?

Allison does not offer guarantees regarding the length of time it will take to train your dog or the behaviour outcomes. Behaviour in any animal is never 100%. It is also determined by a huge number of factors, one of which is the owners commitment to training and management. She does however guarantee to provide you with scientifically based knowledge and skills for training, as well as a commitment to ensuring client satisfaction. 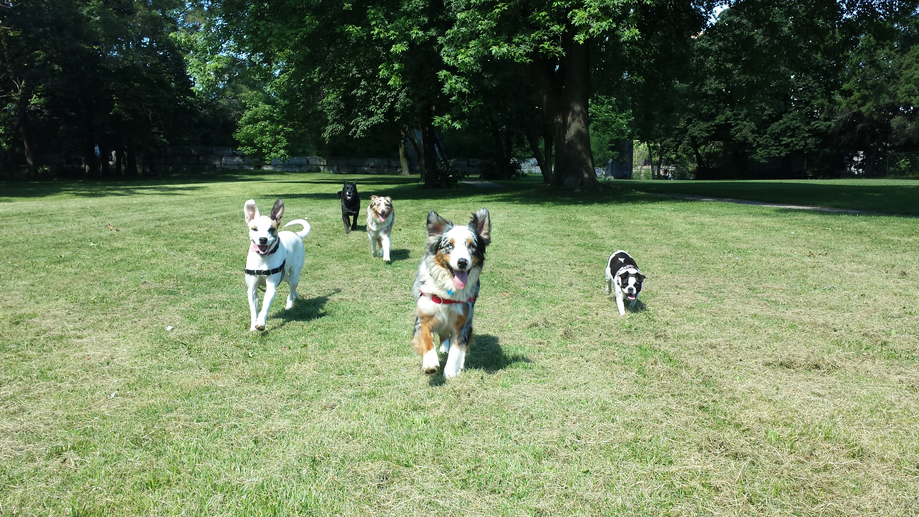